Budget 2019 was announced and although there was not much wildly exciting or unexpected, I thought it may be useful to outline the main changes that could affect / be of interest to you.

The Earned Income Credit has increased by €200, from €1,150 to €1,350. This credit was introduced in Budget 2016 for self-employed individuals (including proprietary directors) with earned income who are not otherwise entitled to the PAYE Tax Credit. The PAYE Tax Credit is unchanged at €1,650.

The marginal rate of tax remains at 52% for employees and 55% of self-employed tax payers. The inequity of treatment between the self-employed and the PAYE employee continues (despite the fact that the Budget confirmed that Jobseekers Benefit will be extended to the self -employed in 2019) . The self-employed get a lower tax credit than employees, , potentially pay higher USC and also enter liability to PRSI at a lower point (€5,000 vs €18,304 for employees)

The rate of DIRT has been reduced by 2%, from 37% to 35%. In the 2017 Budget speech, the then Minister for Finance committed to reducing the DIRT rate by 2% in each of the following three years until it reaches 33%, he seems to have continued in this vein.

Despite lobbying by various Life Insurance companies and broker bodies, there was no change announced in the penal rate of exit at on investment gains of 41% or the 1% government levy applicable to savings and investment plans with Life Offices.

Given the historic low interest rate environment, the reduction in DIRT, while welcome, is not much of a reason to celebrate. Disappointingly no change was announced to the exit tax rates, either personal or corporate, which apply to life assurance savings and investment products, or indeed to the 1% Government Levy on such investments and savings. Thus the exit tax rate for personal investors is still a penal 41% and the rate for corporate investors is unchanged at 25%. It is puzzling that a discrepancy in tax treatment continues to exist between investors who invest through a life office (taxed at 41%) and those who buy individual shares. (liable to capital gains tax at 33%) -  I don’t think people who invest in individual shares (e.g. recall bank shares) should be granted disproportionately better tax treatment i.e. 33% on any gains made compared with people who invest in a 100% equity fund who are taxed at 41%. A typical equity fund holds 50-300 different shares which is much safer than buying a single company’s shares. Why are people being taxed more for making a more prudent investment? It doesn’t make sense....

In Budget 2017, the Government indicated that 100% relief for mortgage interest on rental properties will be restored on a phased basis over the next five years. Relief was to increase by 5% a year, commencing with 80% interest relief in 2017. This change was to apply to both new and existing mortgages. The Government have announced in Budget 2019 that the increase in the amount deductible will be accelerated so that a 100% deduction is available from 01 January 2019.

To be largely welcomed particularly by those who find themselves as accidental landlords as a result of negative equity and changing circumstances. A word of caution though is that the provision of 100% interest deductibility  makes the repayment of capital marginally less attractive in a tax sense. In the boom times many landlords were reluctant to pay down debt as this would reduce their offset against rental income. I hope we have learned our lesson and that debt is a bit like scratching - it only provides relief for a while..

Given the rise in property values in recent times and the dilution of dwelling house relief in legislative changes over the past number of years, many middle class families may be unaware that their children may be exposed to an inheritance tax bill on legacies. A 3.2% rise in the Group A threshold does not reflect the increase in property prices, particularly in Dublin and the commuter belt, so I feel that such an increase was on the mean side.

A €5 per week increase in all weekly social welfare payments, including disability allowance, carer's allowance, Jobseekers' Allowance and the State pension. This means that the weekly rate of State Pension (Contributory) – Personal Rate will increase from €243.30 per week to €248.30. per week from March 2018.


Private Pensions - there were no changes to the following:

The government recently committed to increasing the State pension in line with inflation. In this Budget they have provided a 2% increase in the State pension benefit. Lest we forget..there is a pension timebomb that is ticking - the State Contributory pension is funded out of current Exchequer purse and given that Ireland has an aging demographic where in the future it is estimated that there will be 1 person over age 65 for every 3 that is working (it is approximately 1 person over age 65 for every 6 working today) this largesse will be harder and harder to sustain.

However it is very welcome that the attractive tax incentives for private provision remain, although the need for effective mandatory pension provision is fast approaching. The requirement for pensioners to lock the first €63,500 of their post retirement pension funds into an Approved Minimum Retirement Fund (AMRF) may be coming to an end sooner rather than later. - assuming the individual is entitled to the full Contributory State Pension they will have met the specified income requirement of €12,700 p.a, hence removing the AMRF requirement. Perhaps it is time to simply do away with this added complication to pension planning?

As with all previous Budgets the finer points of detail will come out over the next few days. Should anything more of interest be uncovered I will update accordingly. If you have any queries I would be happy to help. See picture below for updated rates with revised rate bands, social welfare rates and other information. 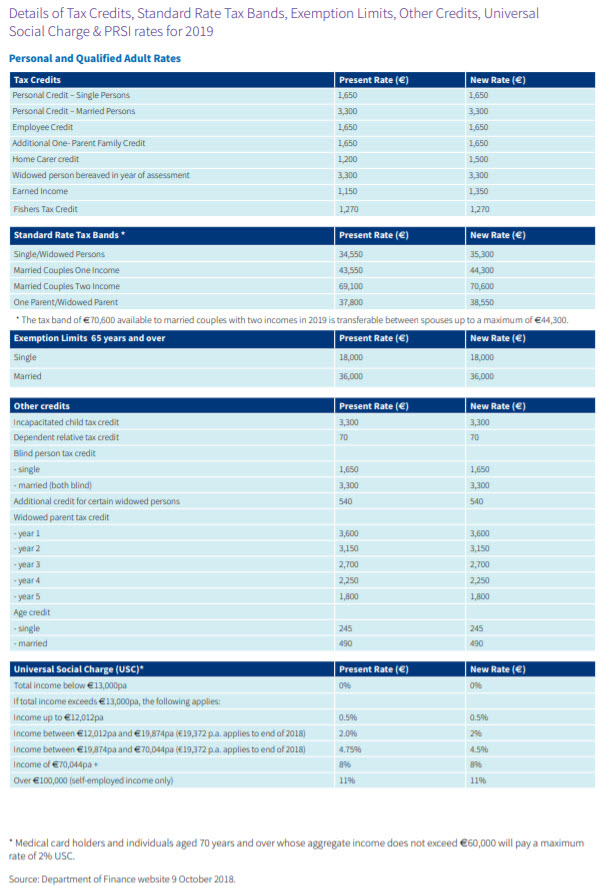 Please feel free to pass this mail onto anyone who you think may be interested / affected.

Gavin Gilmore trading as Gilmore Insurance & Financial Services is regulated by the Central Bank of Ireland.
All rights reserved. Made by nicework.